Wright-Patterson Air Force Base is located northeast of Dayton, Ohio, and encompasses parts of Greene and Montgomery counties. The base has a rich aviation heritage. The pioneering work of Orville and Wilbur Wright from 1899 to 1903 enabled them to achieve the first manned, powered flight. After their success at Kitty Hawk, they returned home to Dayton, Ohio, where in 1904 and 1905 they perfected their flying skills while turning the Wright Flyer into the first practical airplane capable of fully-controlled flight. They accomplished this work at the Huffman Prairie Flying Field, now a part of Wright-Patterson Air Force Base. From 1910 to 1916 the brothers operated a flying school at Huffman Prairie. Among their 119 students were Henry "Hap" Arnold who commanded the Army Air Forces in World War II, and H. Roy Brown, the Canadian ace who was credited with shooting down the Red Baron in World War I.

Today, just off the end of Runway 23, a marker, sign and replica of the Wright Brothers 1905 hangar and catapult launcher commemorate the exact location of their early aviation accomplishments. In 1992, Huffman Prairie became one of four sites in the Dayton Aviation Heritage National Historical Park.

Wright-Patterson Air Force Base has been a leader in military aviation development from the time of airplane inventors Wilbur and Orville Wright to today's aerospace age. 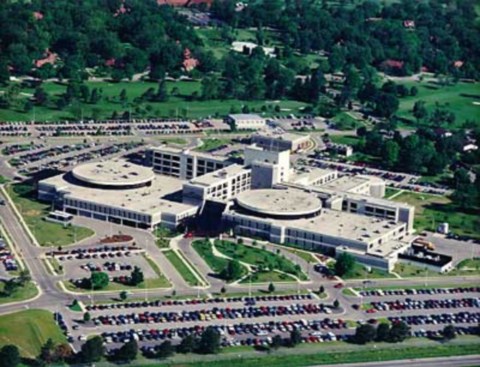 Surrounding communities include Beavercreek, Fairborn, Riverside and Huber Heights. With over 30,000 employees, including military, civilian and contractors, Wright-Patterson is the largest single site employer in the state of Ohio with an economic impact of $4.2 billion per year. The base covers more than 8,000 acres of land (12.5 square miles) and provides operational support for more than 100 associate units located at Wright-Patterson. There are two runways, supporting an average of 47,000 aircraft operations every year. The base is divided into two areas - A and B. Ohio SR 444 runs between the two areas.

The base is headquarters for a vast, worldwide logistics system, a world-class laboratory research function, and is the foremost acquisition and development center in the U.S. Air Force. Dozens of associate organizations representing a broad spectrum of Air Force and Department of Defense activities call Wright-Patterson home. The base is comparable to a medium sized city with services ranging from shopping facilities and child care centers to housing areas and a large medical center.

The Air Force Marathon is held at Wright-Patterson Air Force Base on the third Saturday of September every year. The events include a two-day Expo, a full and half marathon as well as wheelchair, 10K and 5K races.

Air Force Research Laboratory: AFRL is a global technical enterprise, leading the discovery, development, and integration of affordable warfighting technologies for our air, space, and cyberspace force. With a workforce of more than 10,000 across nine technical directorates and 40 other operations across the globe, the Air Force Research Laboratory provides a diverse portfolio of science and technology that range from fundamentally to advanced research and technology development.

National Museum of the United States Air Force: The oldest and largest military aviation museum in the world, with four hangars and over 300 aircraft and missiles on display, including a variety of Air Force One airplanes, displays and memorabilia.